Taking a page off the interwebs, I'm doing an artist interview with Josh Yeoh in line with the launch of his worship album, In That Day, today!

This album, In That Day, seems to have sprung to us from out of nowhere, along the lines of *khazam! An album appears!* Can you give us the low down on how it came about?
Technically, I've wanted to do a worship album even before my first album. I just never felt it was the right time. And then right after the 168 Hours of Prayer this year, I got the "green light" from the Man Upstairs. Which was ridiculous, because it was also when I was the busiest. But I knew it was Him, and even when He said it'd be done in November (which is ridiculous... I say that a lot, don't I?), I knew that it would be a testimony about His strength being perfected in weakness. So yeah, it's been something that's on my heart for a long time, but it only just kind of came together in the past three months.


How does the recording of In That Day compare to Is Anyone Out There?
I thought about how to describe it because I don't want you to think that one is more or less personal than the other; they are both deeply dear and personal to me. So this is how I think I'll describe the difference. It's like if you had two blogs -- one for random "this is what is going on in my life" type entries that people are welcome to read and they might really be impacted or learn something from it, but the main focus was really just what you were going through. That would be "Is Anyone Out There?". Then the other type of blog where you have a message burning on your heart and you write passionately about it and people who read it are impacted not so much by your personal experiences, but what you are saying as a result of those experiences and what you are learning combined. That's "In That Day". :)

You mentioned in your e-mail update that things were getting a bit crazy towards the end - what kept you going through it all?
Prayer. Seriously. And people stepping up to say, "Hey Josh, don't go crazy, let me help organize your life for you". That and caffeine. Caffe Laffare.

Describe the theme of your whole album in one word. :)
Revelation.

Which was the most difficult song to write? And which was the easiest?
If degrees of difficulty were measured by hours, then "Prepare The Way" would be the most difficult, simply because it started when I was 16. I have a fun story about that, you'll have to ask me next time. :) And the easiest would be "The Bridegroom King", which wrote itself in less than five minutes. I think I edited one word.

Describe yourself in three words.
Friend of Bridegroom. (You didn't say it had to be grammatically correct)

When is the next time you're going to update your blog? Will it be sometime in the next decade? *evil grin*
Have you been on my website? I totally wrote a blog there! It's ominously reminiscent of the blog entry I wrote when I tried to restart my other blog. And the other one. And the other one. But thankfully, this time, I think I have a plan of action.

Who's your favourite songwriter and why?
Oh no. I hate these types of questions. It's so restrictive. Can I pick two? That's already asking a lot! I like Phil Wickham and Brooke Fraser, although they both write pretty differently. But I like them for the same reasons: the way they marry text, tune and theology.

Tell us how and why you started writing songs.
I think the first song I ever wrote was for Teacher's Day when I was 10. I, unfortunately, still remember parts of the song. So I started writing out of necessity? :) I guess that's somewhat true. Why did YOU start writing, Anna Tan? [not answering that, nope!]

Any words of advice to aspiring songwriters out there?
Don't say "God gave me this song" and then refuse to edit. Songwriting is a craft. It's partnering with the inspiration of the Holy Spirit, and it's good stewardship to learn how to write good songs. I'm constantly learning. I just discovered I really like using internal rhyme. That and... don't stop writing. You never know how a song you wrote over 10 years ago and thought wasn't much good would come back and become the opening song of your second album. :) 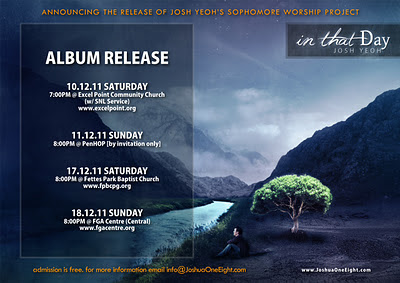