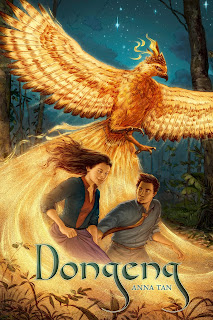 ... when Sara woke up early one Sunday to find a bird perching at the foot of her bed, she was shocked. She stared mutely at the animal, wondering how it had gotten in. It wasn’t any bird she remembered seeing before; pigeons and crows were what she was used to, not great big birds in bright golden plumage with a flaming horn.

“What the—” She bolted upright. Rubbed her eyes. Stared.

The bird chuckled. Sara slapped her face lightly, wondering if she was awake.

“You’re awake, Sara,” the bird said. “Let me introduce myself. My name is Garuda. Ah, I see a spark of recognition there. You have heard of me, yes?”

Sara nodded mutely. Why is this happening? She tried to pinch herself.

“I am a legend. Everyone knows of me. Which is why I have been chosen to come and speak to you. Again.”

Sara pulled the blankets up around her body, as if building a wall between the mystical bird and herself. “Again?”

Realisation dawned upon her. “Oh!”

“Right now, I deem that you are not sufficiently awake. If you could wash up and maybe make a cup of your preferred caffeine fix, that would be great.” He started to fly off, then settled down again, staring at her with piercing eyes. “I assure you I am not a dream.”

Garuda flew out of the room without a backward glance leaving Sara staring at the open door. In a daze, she stumbled out of bed and into the shower, where she took an extra-long, extra-hot shower. She left feeling refreshed and comfortable, having quite forgotten about Garuda. She was boiling water to make instant noodles and tea when Garuda re-materalised and perched on one of the dining chairs. Surprised, she threw the hot water at him, screaming.

“What was that for?” Garuda said in annoyance as he flapped frantically out of the way.

She stared at him. “You’re not a dream!”

“I told you that already,” he huffed, settling on a dry chair.

“Okay. Yes. You did. I forgot. Sorry.” She hurried to wipe up the spilt water and then stopped to stare at the bird.

“Go on, you were in the middle of making breakfast.”

Sara opened the packet of Maggi Kari, noting distractedly that her hands were shaking as she poured the flavouring powder into the bowl. She managed to pour hot water into the bowl and into her tea cup without spilling anything. When she was finally settled at the table with food and drink, she took a deep breath, grateful that she hadn’t dropped anything.

She looked expectantly at Garuda. “So…”

“Go ahead,” the bird said politely, cocking his head to one side. “I’ll talk while you eat.”

He waited until Sara had started eating before he cleared his throat. “You read fairy tales, don’t you?”
Sara looked up at him and nodded.

“And you know Tinkerbell’s story.”

“The Barrie version or the Disney version?”

A smile crossed his face. “Ah, most people would not even think to ask that. The Disney version.”

“At that tragic moment when Tinkerbell is dying and Peter is trying to save her, what does he do? He asks all the boys and girls in the world to clap for her. The more that clap, the more that acknowledge her existence, the faster she recovers. It’s the same thing. Your belief and your stories fuel our continued existence.”

“So, you are being forgotten and you want me to be like him and save your world?”

Garuda’s grin looked almost mischievous. “Yes and no. You see, we’re in this unique position of being part of stories told in a language that is confined to these borders. And as much as we can try to keep ourselves alive in the Kisah Dongeng, hikayat and folklore of these people, we won’t get very far. Once our language dies out, we will die too.”

“Your language? Dying out? Malay is the official language of Malaysia. It’s not going to die out. Not like all the other little dialects and tongues used here. I mean, if you were saying that Iban legends or Dayak legends were dying out, I’d believe you. But Malay? I mean, everyone in this country of 30 million people knows the language.” It was true. She spent eleven years in school learning it. She may not be fluent… but at least she knew it.

Dongeng is now up for pre-order! Check out the landing page here! :)

Super lovely cover commissioned from Charis Loke features Sara, Helmi, and Garuda. Check out her site if you want to commission her art.
Posted by Anna Tan at 1:07 pm