#guestpost: Talk about the World of Gryphendale

My name is Lara Lee, and I am the author of three young adult fantasy fiction novels and short stories. My newest book, The Gryphon's Handmaiden, has just come out this week! All my books take place in the world of Gryphendale. The Gryphon's Handmaiden specifically focuses on the palace at Vervain, the country of Samodivas, and the Nomad Desert.

Tell us about Gryphendale!
Gryphendale is the faerie realm that we sometimes call the Seelie kingdom. It is a floating disk-shaped island located in the center of the earth. It has a tiny sun and moon of its own creating both day and night, but time moves differently there. Their stars are just glittering gems on the inside of the earth’s crust reflecting the light of their sun.
In the distant past, faeries and humans lived together, but because of greed and evil schemes, this could not continue. The creator God, the great blue Gryphon, separated the worlds. A person cannot travel through the earth’s crust to get there. Instead, there exist four portals to connect our worlds.
Both sides of this world are inhabited. The top is made up of nine countries ruled together as the single kingdom of Gryphendale. A different race of faerie dominates each country. The Sprites live in tree houses in the tops of the vast forest of Caoneag. The shape-shifting Hiru live in human-like homes scattered throughout Cuelebre. The Gnomes live inside the massive trees of Dwende. The Gryphendale Ocean is the realm of the Merpeople, while the Undine rules the river and a great lake. The Ogres dwell deep in the mountains of Rokurokubi. Aberdour is the country of the industrious Brownie farmers. The Huldra hunt in the forests of Samodivas. They used to own the Dryads as slaves, but once freed, the Dryads now rule the young country of Greenbow in their historic homeland. The Nomad Desert lies outside of these kingdoms and is inhabited by those who want no king.
The underside of their world is called the Shadow of the Gryphon. It is made up of mostly ocean inhabited by nomadic sea-people such as the Kelpies, Selkies, and Merrow. The Nix populates the small land mass on that side. The Guardian of the Oceans rules that realm.
My books and stories all take place in this world about the size of the state of Texas, both past and present. I wander this land often and would love to introduce you to my favorite places. Safe travels!

What dangers should we avoid in Gryphendale?
Many creatures inhabit Gryphendale who have no country of their own. The giant trolls eat all meat no matter the source. The Red Ladies are psychic vampires stealing the life potential of wanders. Deadly animals, thieves, and grumpy Ogres could all cause trouble if a traveler isn't careful, but the people of Gryphendale are friendly to help you out of a bind.

Is there a distinct or unusual type of food or meal that we might be served in Gryphendale?
Humans would recognize most foods, but they do have a lot more purple varieties of crops such as purple berries and purple wheat. They also have a unique, intoxicating drink made from distilled cinnamon which they call tonic. Don't drink it though! It burns human throats.

What types of weaponry or fighting styles are common in Gryphendale?
The various faerie races have their own fighting styles, but most use some kind of sword suited to their strengths. One exception is that the Hiru transform into long serpent-like dragons. Some rare people do use magic. The Adder Warlocks use dark magic to kill, but those who follow the Way of the Gryphon often avoid violence if they can. Rogue wizards and magic creatures also get involved in the battles, but you never know what will happen with them!

What types of vehicles, animals, technology, etc. are used to travel in or to Gryphendale?
To get to Gryphendale from the human world, you would need to use one of the for portals. In Gryphendale, most people walk or swim. They do ride horses, giant salamanders, carriages, wagons, mules, and the odd steam-powered horseless-carriage. 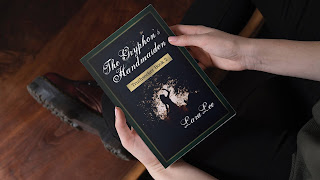 What role, if any, does magic or the supernatural play in the lives of people in Gryphendale?  If there is magic, please give some examples of what it involves or how it’s used.
All was made by the creator God, the great blue Gryphon. All magic comes from Him to sustain the worlds. Seers learn how to pour themselves into the magic potential of each living thing to create good things. Dark magic seeks to steal this magic potential and force it to their will. This is destructive and deadly. All magic and magical creatures were created with abilities to care for the world in unique ways.

What is the political or government structure in Gryphendale? Who is in charge there at the moment, and what kind of leader is he/she?
The governments in of the countries are different, but usually, there is an elected monarch that is often passed down to their children. This varies from country to country. The nine countries then have a unified central goverment with an elected king or queen. At the time of The Gryphon's Handmaiden, both the king and queen were elected and co-rule. This central government works more like the council in the United Nations rather than having as much power as the United States does over each state.

Has anything in your actual life inspired the locations, cultures, etc. in your book?
I grew up in Florida in which I obsessed about mermaids as a child. I never could read enough fairytales.
When my husband and I moved to Scotland for four years, I became emersed in the folklore of Great Britain. Scotland, specifically, has a rich history of faerie stories. I describe inns and taverns for places I visited in Edinburgh and then hills and dirt roads of the countryside. I know exactly how far one can walk in a day because I have done it. Gryphendale was my magical interpretation of my travels.
In the Gryphon's Handmaiden, the country of Samodivas in a mix of Spanish and German culture. This may seem strange, but this my cultural upbringing. I had a Cuban mother and a father of German descent.
The book Laurence of Arabia strongly influenced the Nomad Desert and then my obsession with learning all I could about Petra and the country of Jordan. I still have dreams of visiting there and traveling around on horseback.

What is unique about your newest book?
Prince Timothy and the Brownie, Arthur, travel to the Nomad Desert in search of the Gryphon's Codex to stop the Adder Warlocks from trying to take over the world. Even though I spend a great deal of the first part of the book at the palace at Vervain, my favorite part of the novel is in the desert itself. There they meet a mute run-away slave girl named Tabatha who has more power than they knew was possible. The characters must overcome so much in a few months to accomplish their goal, but most of what they deal with are not magical problems. They have to learn how to survive in the desert, earn money for food, and exist in the culture. By the end of the book, Prince Timothy is barely recognizable. Instead of a spoiled, academic prince, what remains is a strong, tan desert lord.

Lara Lee is the author of the young adult fantasy fiction novels Gryphendale, The Shadow of the Gryphon, and The Gryphon's Handmaiden. She has also had two short stories published, "The Worst Hero Ever" and "Trust Old Juniper." Sometimes, she is also a graphic designer, wife, and mother. After growing up in Florida with her head stuck in various books, she ran away to Oral Roberts University to obtain a Bachelor of Science degree in Graphic Design and a husband. Then, she worked professionally with the children's curriculum publisher, Mentoring Minds in Texas before following her husband on a crazy adventure in Scotland. She has lived in three states and four countries and has visited even more destinations with an insatiable curiosity that shows up in her writing. Currently, she lives in Texas with her husband and two sons who all regularly participate in her misadventures and random schemes.

The Gryphon's Handmaiden comes out January 29th on Amazon!
You can purchase it here: https://www.amazon.com/gp/product/B07ML4W98S/