Right after formal classes ended last month, I went a little crazy and decided to buy tickets to as many shows as I could afford. Obviously, I'm also rather cheapskate and I need to save money, so I ended up buying cheap, upper circle tickets to three shows (altogether less than GBP100, so yay me). 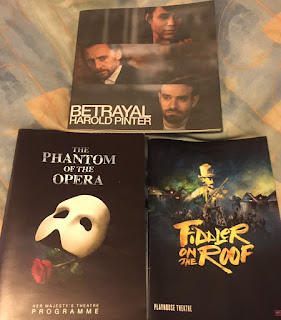 My selection felt rather eclectic overall so I thought I'd talk a little about why I picked the shows and also what I thought about them.

The first show I watched was Betrayal on 15 April, for two reasons: I've still regretted missing the PenangPAC run with Marina Tan and OHLOOKIT'STOMHIDDLESTON. Lame? Maybe. But I'd heard that the story is amazing, and it has a famous actor, so why not?
Well, the show was fantastic. I do have to admit that I didn't always pay close attention to the acting, mostly because I was fascinated by the staging as well as the moving pieces of the stage. (This might be a thing with me; I remember being super distracted by the moving stages in Lion King too LOL). I was waaaayyyy at the back so I might probably have missed some frontal projection cues if they were blocked by the overhang (and maybe super close facial expressions), but it was a really good vantage point to see the lines between the actors, the use of space, that revolving stage indication of going back in time. It was a really minimalistic staging (except for that revolving thing) that played a lot with lights and shadows--the silhouettes were so sharp you could actually just watch that instead of the actors.
I loved Tom Hiddleston's and Charlie Cox's performances, but Zawe Ashton just gave me the feeling that she was trying a little too hard? I don't know what it was but somewhere between the tone of her voice and some of her actions/reactions, I just got a little annoyed at her. I might probably be judging her a little too harshly (always that but *I* wouldn't have made those acting choices) but I could just be disliking the character, though (which by implication would mean Ashton did a great job, so idk).

The next one was The Phantom of the Opera on 29 April. A classic choice-- loved the songs, wanted to see it because I'd seen the movie and wanted to see how they could do all that on stage. Realised that I have fuzzy memories of the plot, so there were some bits where I was like, eh, did that happen? Not sure if there were substantial changes in the movie version, though. (I have read the book, the book is 0% like the musical. Well, 20%. The characters and the basic setup are the same-ish. If I recall correctly (it's been decades), it was very much focused on the phantom, I think, and Christine was really a side note. But reading the book you'd be like, how did this become the musical?!)
Anyways, mixed feelings about this. I'd been pre-warned by Choon Ean that it might not have aged well, seeing it's a really old show and it's using the same original stage, so whatever was new/fresh/impressive then would seem kind of old-fashioned now.
I liked all the dungeon scenes, with the moving bits and the lights and the smoke and the candles and the tilting walkways and the boat! (See, moving stages gets mentioned again haha). The singing was impressive, the staging and the acting and the mirrors and illusions... everything was AWESOME, except the one key bit that spoiled everything.
When the chandelier "fell", you could literally SEE THE STAGE HANDS WALK OUT THROUGH THE CURTAINS AND CATCH IT.
Another thought that struck me though, was that my memory of the Raoul-Christine-Phantom triangle seemed rather romantic? The Phantom had a sort of sad romantic vibe, like, aww you like this girl so much but she doesn't love you in return, poor puppy let me give you a hug. Seeing it again, the Phantom was all kinds of creepy. Like the friendly neighbourhood dad/teacher/helpful uncle/starstruck fan, who suddenly turns into a perv. And I was going like, NO THIS IS NOT ROMANTIC. The Phantom is AWFUL. And then the songs don't seem so romantic anymore. lol.

Finally, I caught Fiddler on the Roof yesterday! This was 100% nostalgia and throwback to the time when we were stuck in a house in Sweden and had the movie on replay until we could sing all the songs word for word. I can't do that now, but I *know* all the songs.
It was fantastic! No moving stages for this one--it was flat and static boo--but the scene changes were as interesting to watch as the show itself, so yay. I might decide to watch this one again from a better vantage point--the place I was sitting had a bit of a restricted view, so there was this corner/angle of the stage that I couldn't quite see. Idk yet though, if it comes down to it, I'd rather watch a new show than to re-watch one. We'll see.

As a minor writing update, this is today's stats! 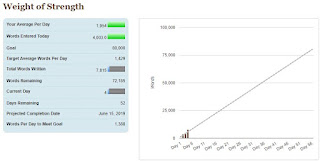 I didn't do all this today, it's just that I didn't update my stats yesterday, being out and all. Things will seem more slowgoing from now on though, since I've reached the end of my pre-edited stuff. From now on, it's actual writing and slogging!
Posted by Anna Tan at 6:59 am