#nanowrimo update and a #fridayflash

And this is how you stagnate: 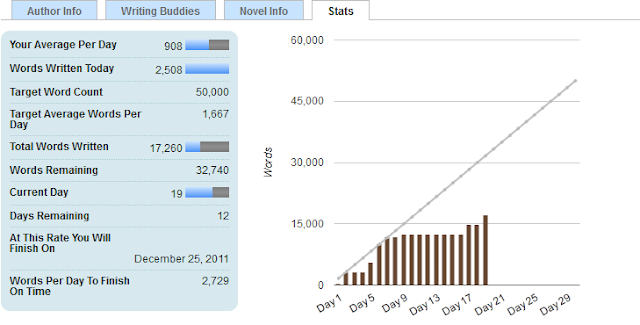 A 5-day vacation followed immediately be 3 deadlines (one submitted, two to come) is the root cause. I don't know how it's going to work out, especially since I've been hitting some snags plot wise. But at any rate, since I'm at it, I'll give you the initial short story I wrote that started off the whole idea in the first place. Maybe it should have remained a short story (but probably more developed) than this mess of a novel it is trying to become. I'm still wondering if I should work on a short story for the Commonwealth competition.

Urgh. I need more than 24 hours in a day. Or probably at least learn how to survive (and function) on less than 6 hours of sleep.

Shell was left alone. He had the urge to laugh hysterically, the ridiculous image of the one time he had argued with his teacher in school and had been punished to stand in the corner of the room wearing the dunce cap arising in his mind’s eye. He gulped it down, reminding himself of the vast difference in circumstances.

His hands were tightly bound before him, a length of chain that looped through his collar holding them waist level. Twisting his head to the left and up, he saw that the end of the leash had been tied to a metal ring in the wall. Not as if he could move it anyway, there was some kind of magic in the bonds that prevented his fingers from untying them. He shifted his weight on to his left foot, the brand on his right sole was aching again.
He stiffened as the door opened. The tall, blond princess entered, coming to a stop before him. Kest snapped her fingers and a goblet rose from the side table, floating gently into her hand. She sipped slowly, her eyes still focused on Shell.
“What magic is it that you have?” she asked, her voice low and throaty.
“M… Magic, Yo… Your Highness?” Shell’s wide eyes were still staring at the goblet. “I… I’m just a m… musician.”
Her long fingers pinched at her lower lip, her eyes narrowing. “Musician! Pah! You think you can sooth my father with mere music? There is magic in the tunes that you play.”
“Maybe it… it’s in the instruments, Your Highness. I… I don’t know any m… magic.”
“In that old harp they chain you to? It’s been there for the last fifty years, soaking up the blood of each musician that has displeased my father. Most of them last for only a day or two. You’ve been here for nearly a month. And yet I wonder why I never noticed you earlier. You, who dare perform magic in my courts.”
He was shaking now, shrinking back into the corner, sure that his end had come.
“I… I didn’t mean to, Your H… Highness. It was… was a mistake. I…”
She laughed as he fell on his face.
“P… Please don’t kill me! I… I won’t do it anymore.”
“Don’t do it anymore.”
Shell couldn’t tell if it was a question, or a statement. “No… no, I…”
“Do you have a death wish then?”
Her voice had moved. Shell sneaked a peek up to see that the princess was now reclining on her couch.
“Come here, boy.”
He glanced up at the wall to see the leash untying itself. He swallowed hard as he crawled toward her, hampered by his bonds.
There was amusement in her voice as she said, “You may rise.”
With a nod, he got to his feet, walking as best as he could in the short length of chain that connected his ankles.
“The shoes, please. Put them by the door.”
“As you wish, Your Highness.”
He worked at the many laces that held the high boots together, but it seemed that as he got each one untied, somewhere else his work was undone. The knot in the pit of his stomach grew bigger with each passing moment, beads of sweat rising on his forehead. And yet the princess didn’t speak. He didn’t dare turn to look at her, wondering in the back of his mind if this was some strange game she was playing, a prelude to his torture and execution.
He grit his teeth as he worked on, determined not to give in.
“What is your name?”
He startled at her words, his fingers fumbling. “Shell, Your Highness.”
“Relax, Shell. Close your eyes and imagine the knots in your mind. Can you see the centre? Play it like your harp.”
Shell closed his eyes and tried to think, the image of his own grisly death intruding into his thoughts. And yet even as his eyes shut off the light, his fingers seemed to find their own way in the darkness of his mind. A gentle touch here, a tug on that end, a pull, a push. He blinked as the boots slid easily off her feet into his hands. He wobbled to his feet.
“Never mind about that,” the princess flicked her fingers and the boots flew away of their own accord. “Come here.”
He sat where she had gestured, pulling his knees to his chest.
Her eyes, level to his from where she reclined, scrutinised his face.
“So strong, and yet so unaware. Do you know that even my apprentice has yet to reach the magical strength required to remove my boots? And you do it on your first attempt.”
“Please, Your Highness, I won’t…”
“You won’t what? Do magic anymore? You can’t help it, boy. It’s in you. And if you stop, if your music ceases to please my father, you’re as good as dead. No. I could use you.”
She stopped pulling at her lower lip, seeming to come to a decision. “Come along then,” she said as she got up. She strode to the door. Shell gaped as the boots laced themselves around her feet. The leash tugged at him and he hobbled along behind her.
---
Posted by Anna Tan at 2:36 am