It was like using a hammer to kill a fly, or so they said. It didn't matter, she thought, as long as something died. It didn't help that she was sleepy and hungry and overall feeling extremely overwhelmed. There was no fly. But there was a hammer. And the hammer was gleaming in the bright office lights, enticing her.

She picked it up. It seemed to be almost humming to her, a soft simple song that resonated within her chest, magnifying her murderous impulses. It was mesmerizing. She tore her eyes away from the silver hammer, looking back at the piles and piles of work that had yet to be completed. She wanted to kill something.

Two steps. She stopped in front of the water cooler, looking down at the hammer in her hand. She shook her head. She must be having delusions from working late all week, she decided. She placed it down on the counter top and turned to pick up her mug.

Seconds later, she found that she was still standing at the cooler, her mug having mysteriously relocated itself somewhere else, with a silver hammer bearing the name Maxwell gripped tightly in her right hand. She stared at the head of the hammer and hoped that the little dirty spots in the midst of the gleam wasn't what she thought it was.

Closer inspection brought a flattened fly and a paper clip to her attention. She almost sighed as she happily surmised that she hadn't bashed anyone's brains in yet. Her eyes wandered to the paper clip again. As she stood there, pondering, another paper clip flew past her. It didn't make sense and she didn't think she could muster enough energy to bother trying.

She put the hammer back down and went back to her table. There was a huge hole in the middle of her laptop, through the table top and down into a dent on the floor.

It was like using a hammer to kill a fly. She found a tissue and wiped the fly off the hammer. 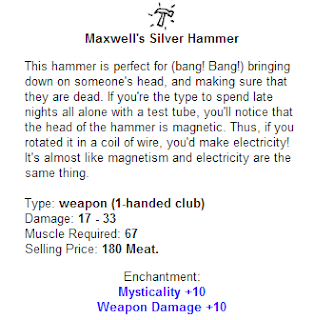