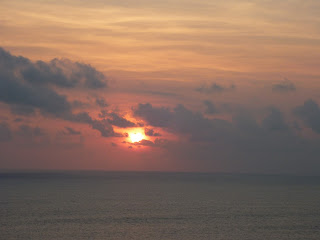 He pretended he could see her over the backs of the aircraft's chairs, over the heads of the people between him and her. It had been years since he had seen her, since they'd left college, since they'd broken up. He wondered if she'd finally achieved what she had been chasing so desperately after. Maybe she had. She'd looked to poised, so successful, so... somehow sad.

"Life isn't a race, you know?" he had said to her rather angrily one day after listening to an hour-long rant about why he should be focusing more on his studies and less on other things.
"But you need to do well now to get anywhere in life," she had protested.
"Must we get anywhere?"
"Of course we must! Don't tell me you want to remain a student for the rest of your life? Bumming off your parents? Never achieving anything, any measure of success on your own?"
"Of course I do -"
"Then you've got to start working towards it."
"Can't you just enjoy it while it lasts?"
"While what lasts?"
"This! This peace. This little eddy of not having to work so hard. It's sem break. Come on."
"Go do whatever you want. I'm not going."
"Janice..."
"Go away, Keith. I need to study."

He wasn't proud of the way he had stormed off that day, slamming the door of her house behind him. His temper had pushed his feet down hard on the gas pedal, earning him his first speeding ticket and a nasty gash on his car. He could see the "I told you so" written all over Janice's face the next day when she came to drop off the jacket he'd lent her ("You left this behind," she'd said rather frostily). They hadn't spoken for the rest of the college year.

Keith stared out the window at the passing clouds, wondering if it would be too forward of him swap seats to be next to her, to ask her whether she'd made it, just to confirm. He wondered too, if she'd forgiven him - but quite obviously she had, by the way she'd greeted him in the airport. He twisted the simple golden band around his left ring finger. Sharon would be waiting for him in the arrival hall, little baby Pierce in her arms, and he wouldn't have a chance to talk to Janice again. He didn't believe for one moment that she would remember him by the time she'd reached home.

And yet indecision paralysed him. He was content, with his average job, with his average wife, with his average home, but was she? What if, by talking to her, he'd stir up a something that would disrupt his perfect content?
What do I do?
Nothing, he decided. Let nature take its course, let whatever will be, will be. He'd never been the type to take the future by the reins.

He smiled across the backs of the chairs and over the heads of the passengers between, to where she sat oblivious to him and his thoughts. Just by appearing, she had already disrupted his content - not so perfect after all, but then again Janice had always had that effect on him.