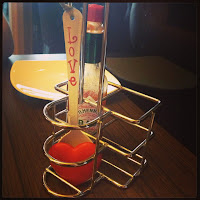 It never struck Sharon necessary to hate anyone. The level of negative emotion necessary for the act was not worth the effort. She had always wondered at how her friends could find the energy to hate certain people in their circles, whether they were their high school acquaintances (calling them friends would have been an oxymoron) or their husbands' colleagues. All that changed when she saw the woman talking so animatedly to Keith, finally giving him her name card.

She shifted Pierce in her arms, craning her neck to catch sight of the two of them through the reflection of the glass and the continuous bobbing of people around the luggage carousel. She had never seen Keith that excited, or laughing so uproariously, except when he was with his old school mates. He definitely had never laughed that way at any of her jokes.
Pierce whined.
"Sorry darling, did I hurt you?" she said, never taking her eyes off the made-up tart. No one ever dressed like that, except if they were trying to suck up to someone, or to steal someone's husband. Why else would she dress up just to take a flight?

"I'll give you a ring some time this week," she heard Keith say as the two of them approached the exit to the arrival hall.
"That would be great," the woman replied. "I look forward to it."
Sharon watched as the woman strutted away, hips swaying with each dainty step. Keith looked around and checked his watch. Realising that he hadn't seen her yet, Sharon stepped towards him with a smile plastered on her face.

"Hey, there you are," he said, slinging his bag on his shoulder. He leaned in to give her a quick peck on the forehead, then lifted Pierce from her embrace. "How's my little boy doing, huh?"
Pierce grinned at him, clinging on to his neck. "Ga!"
"There's a good boy. Was that a ga or a da? Are you speaking yet?" He made silly baby noises at his son.
"Did you have a good trip?" Sharon asked as they walked towards the carpark.
"Yeah. The project's going well. Wish they'd just shift everything over here in Penang instead of having part of the team in KL though. It's so difficult to coordinate."
"Meet anyone new?"
"Eh? No. The team's fixed on this one, and there's no new hires over at HQ."
"Really," she mumbled under her breath, wondering if she should confront him. But they reached the car and Pierce was fidgety, and the moment passed.
"It's Pierce's first birthday next week," she said, trying to fill the silence in the car.
"Oh."
"What do you think we should do?"
"Anything. What does my wee one want to do, huh?"
"Shall we throw a little party?"
"Why not?"
"Who should we call?"
Keith shrugged. "Whoever you like. Doesn't really matter, does it? It's not like Pierce will remember."
"I guess not."
Sharon stared out the window for the rest of the drive home. She didn't think she had ever hated anyone as much as she did the woman who had taken Keith's heart away from her. She wanted to reach over to him and rip the card to shreds so that he would never see or talk to her again, but she didn't and she didn't know why.