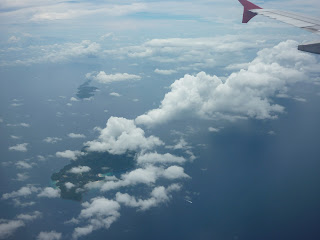 It wasn't like her to not know where she was going. Throughout her thirty years of existence, everyone, from her best friend to her headmistress, had declared her to be the most purposeful, most likely to succeed person in her year. And yet, here she found herself at a loss.
She stared up at the transit sign, a pebble in the midst of the airport's turbulent streams of passengers. Left or right? A frown puckered her brow, reinforcing the wrinkles of the past seven years. She checked the gate number on her ticket and turned left, joining the flow.
Maybe being too purposeful had its downside. She'd worked hard and networked harder, and now here she was, where she had wanted to be, earlier than she'd expected, tired and stressed, but still smiling at random people who - she stopped, turned sharply, almost knocking into a hurrying suit who glared at her.
He hadn't stopped; probably hadn't noticed her in the crush of people. Or maybe there was someone waiting for him at the departure hall. Someone. She stared down at the ticket in her hand, almost oblivious to the quiet curses around her. She was just about to continue to her gate when he reappeared.
"Janice! I thought I saw you," Keith said, a wide grin on his face. He grabbed her hand and pumped it enthusiastically. "Where are you headed to?"
"Home. And you?"
"The same. What flight are you on?"
"The one they're announcing right now," she said, grimacing. "Sorry, have to run. See you back there sometime?"
"We'd better hurry," he said, grabbing her hand. They ran down the terminal reaching the gate in time to slip in at the tail end of passengers.

Janice closed her eyes, hoping to sleep through the-hour long flight home, but her mind kept running in its loops, deepening its well-worn grooves. Her lack of focus and the growing restlessness were getting to her, knotting up in her chest. I just want to end it all, she found herself saying more than once.
"End what?" Lee Chin, her housemate and colleague, had asked.
"I don't know. This. That. Everything," she slapped a thick file, almost sending it down on to the floor. She was tempted to throw it out the window. That was when she decided it was time for a long holiday. It was time to take a break, to think, to reevaluate, to pause, selah.
You're supposed to be happy, the treacherous thought echoed in her head. You've got a cushy job, all you've been pursuing since childhood, you have money and now you even have time to spare. Who else could say they have all of that, at such a young age?
But she didn't feel young. No matter how much she tried to convince herself that she was young, that age was only a number, it came back to her that she wasn't getting any younger, and if she wanted to figure out what to do with the rest of her life, she had better do it now.

It wasn't like her to not know where she was going. It made her feel lesser and she didn't like the feeling.