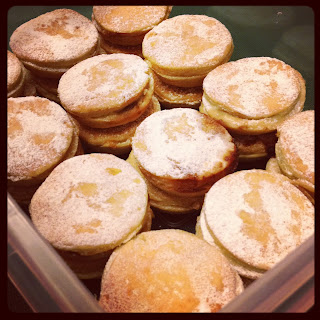 She'd been small then, a little slip of a child. Small-boned, brown-skinned, black-haired. Undeniably other. She peered up at the shelves of pastries. Stared at them hungrily.

He'd loomed large over her. Tall, white, hunched. A crazy grin on his face. Or maybe not so crazy. Just other.

"Cat got your tongue?"

He laughed. "Vegetarian meat. I assure you."

"Just pulling your leg. It's just a mince pie. You'll like it. It's dessert." He wrapped the little pie in a brown paper bag and passed it to her.

I'm writing this in a cafe on Monday afternoon, contemplating the loss of my uncle. Funnily enough the first thing I thought about (true-blue Malaysian that I am) was that there would be no more British Christmas dinners. With roast turkey and potatoes and carrots, cheese cauliflower (no matter how much I do not eat cauliflower OR carrots), trifle and mince pies. Home-made pizza. Dry British humour. The strange way he pronounces things. Stupid things like how he nearly drowned me because I don't know how to goof around in the water like his boys. How I don't always know if he's serious or he's joking (hint: he's usually joking).

By the time this is posted, we would have buried him. We would have bid goodbye to his earthly shell, to the flesh that breaks down and returns to the earth that it came from. It is strange, this coming and this going. Life, death, eternal life. Assurance. Faith. Hope. It is different when a person was still outwardly strong and full of life, than when someone was already nearing the end.

But for now, this is goodbye, until we meet again.
Posted by Anna Tan at 9:30 am