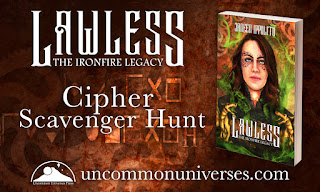 Today on the blog we welcome Janeen Ippolito from Uncommon Universes Press to talk about her new release Lawless and why on earth her steampunk has dragons!

Steampunk, Fantasy, and Cultures: Creating the World of The Ironfire Legacy

And then some people, like me, say “why not both? Plus, you can have DRAGONS!”

When I began to write in Sekastra, the continent featured in The Ironfire Legacy, I actually started with what is now slated to be book three in the series. In this draft, I had a dragonshifter with the ability to shapeshift into any animal trying to escape captivity in a human steampunk city—and then things go horribly wrong (because they gotta). As I meandered through drafting and added more world-building details, I realized the dragonshifter was involved in this dragon-human war that had started decades earlier.

Come on, a dragon-human war? I had to go “back in time” and figure out more of that!

So I took a break from drafting and dug into some hardcore world-building, all reverse-engineering from those handful of scenes I had first drafted. I created the Scepters of Sekastra, four semi-autonomous city-states in different parts of the continent. I had to figure out where to put the dragonshifters, so I created the Cloudpeaks in the center and put the dragonshifters under the thumb of the totalitarian Pinnacle.

Since I’m a history buff, I wanted the Scepters to feature subtly different eras of ‘punk—Lacepunk (1700s Enlightenment period), Dieselpunk (1940s wartime), chromepunk (1920s with fast money), and then classic steampunk with all the trimmings. By giving the different Scepters different cultural preferences (Knowledge, Wealth, Pleasure, and Industry), I was able to explain the differences in fashion and technology. Basically, I could have my ‘punks cake and eat it too, as long as ultimately everything was grounded in steampunk, and I kept the differences subtle and organic.

Aha, but why the different preferences in each Scepter? Well, this is fantasy, so I wanted it to happen. 😉 But more than that, there might just be a missing fifth Scepter—the Scepter of Justice. And in the past, that Scepter of Justice might have had to make some drastic decisions to keep the peace on the continent. And unpopular decisions can sometimes lead to overthrow…

But for more information on that, you’ll have to read Lawless and the other upcoming books in The Ironfire Legacy! 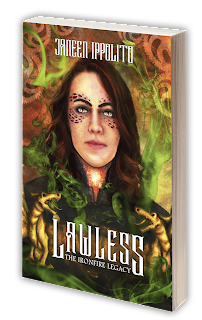 The salvation of humans and dragons lies within a convicted murderer.

Dragonshifter Kesia Ironfire has one goal—to redeem her past by serving the cruel dragon Pinnacle as a soldier in the dragon-human war.

Then a rogue mission to spy on a new airship explodes into sickening green smoke. The same mysterious green smoke that was present the night of Kesia’s crime. When her dragon overlords deny any involvement, she and her tactical partner Zephryn Nightstalker try to investigate--and are sentenced to death.

Still searching for answers, Kesia and Zephryn flee to the human military capital, where Captain Shance Windkeeper has been furloughed after the destruction of his airship. Eager to discover what--and who--blew up his vessel, he agrees to help Kesia and Zephryn infiltrate High Command. In exchange, Kesia must pretend to be his betrothed so Shance can escape an arranged marriage. If only she knew what ‘betrothed’ and ‘arranged marriage’ meant.

But human social customs are the least of her worries. Dark secrets surface as Kesia delves deeper--secrets that challenge the facts of her crime and undermine the war itself.

A steampunk fantasy adventure with a side of quirky romance and snark.

Janeen Ippolito is two authors for the price of one! She creates writing resources and writes speculative fiction with monsters, misfits, and mushy stuff. She's also an experienced author coach, editor, teacher, and the Fearless Leader (president) of Uncommon Universes Press. In her spare time, she enjoys sword-fighting, reading, geeky TV, and brownie batter.

A lifelong misfit, she believes different is beautiful and that everyone has the ability to tell their story. Two of her goals are eating fried tarantulas and traveling to Antarctica. This extroverted writer loves getting connected, so find her on Twitter, Facebook, Instagram, and at her two websites: janeenippolito.com and writeinsideout.com 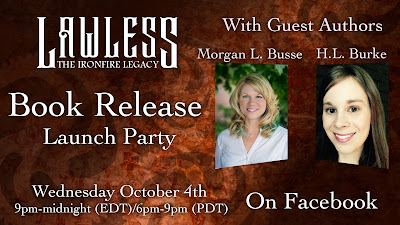 There's a Cipher Scavenger hunt going on with this blog tour, so make sure you check out all the starred posts! (p/s, your clue's down below.)