The Tale of the Hostage Prince is mostly set in a kingdom called Bayangan. It’s ruled by a Raja, who is elected by a council of nobles called the Majlis DiRaja (literally, council of kings, but oh well). This may or may not be influenced by the way the Yang di-Pertuan Agong is, uh, selected in Malaysia but, you know, with a lifetime appointment and other complications. (Wikipedia also tells me Negeri Sembilan practices something of the sort. Maybe S will be for Succession rules, but we’ll see.)

At the back of my books, I give a short blurb on the main places that appear in the Absolution Series. Here’s what you’ll find:

Bayangan is located across the Mahan straits and is said to have been formed by rebels who seceded from the Terang Sultanate due to differences in beliefs. The rulers of Bayangan have maintained its animosity and enmity over the years, leading to frequent wars between the two kingdoms.

That sounds pretty dry, so here’s a little excerpt that covers Bayangan’s founding legend, how it got its name in the story world*, and the Regent’s Festival!

To set the scene: It’s the Regent’s Festival in Bayangan, and Yosua is griping (a little) about his duties as king. (Note: the novel is in Yosua's point of view!)

In keeping with tradition, I’m required to hold the Regent’s Court in the throne room, listening to the gripes of the people and settling them as the ultimate judge over Bayangan. They’re only supposed to escalate the most difficult cases to me—the ones that have been disputed too many times, those which the magistrates cannot handle, those which need a tougher sentencing that only the Raja is allowed to pronounce. Yet most of them are petty squabbles, easily dealt with. I suspect they delay their cases on purpose in hopes that their hearing would fall during the festival—who doesn’t want to say that the Raja himself judged their case at the Regent’s Court? Twenty years ago, when the population of Bayangan was decimated, and the kingdom was in disarray, I can imagine this was a useful tool for my uncle to consolidate power and support, and to prove his ability to rule. But now? Now it is nothing but a useless spectacle.

It’s tough to listen to their long grandfather’s stories without tapping my feet or drumming my fingers on the nearest surface. I would rather even be at parang training, being humiliated by the weapons master, than this. I plaster an attentive look on my face that I can only hope looks genuine. Beside me, Azman sniggers.

‘Shut up,’ I scold with my fingers though, of course, he doesn’t understand.

Various performers congregate in the courtyard, entertaining those waiting for their turn to tour the castle with songs and stories and sleight of hand. Han and his troupe perform in the dining room all day, presenting a stunning repertoire of stories collected from the farthest reaches of Bayangan.

I don’t get to watch until the evening, stuck as I am with my duties. With the crowd ebbing and flowing throughout the day, there’s no formal protocol. Everyone fills their plates from the loaded buffet table whenever they’re hungry and finds a place to sit.

I’m almost done with my dinner when Uncle Jeffett sits down beside me with a heavy thud. His face is unexpectedly grim for an event like this. Straight ahead, the evening performance starts and his expression darkens.

The chorus responds, “If you will listen, O Raja.”

Han echoes, “If you will listen, O Raja.”

“This is how it went,” the chorus replies.

“In the year of the locust, when magic corrupted Terang, there stood a man head and shoulders above the others, who was not afraid to fight alone.”

They launch into a swashbuckling story of the founding of Bayangan, from when Harett Baya rejected the cult of Terang and founded his own kingdom. There are fantastic sea battles up and down the straits accompanied by dramatic declarations, until Harett finally convinces Sultan Yosua to leave them alone. Harett Baya names his newly formed kingdom Bayangan, after himself, and adds Regis to his surname. His descendants—and many nobles who aspire to kingship—tag the ‘ett’ suffix to their names in honour of him. It’s a beloved story, but not one that I would have preferred the rapt audience to be reminded of right now.

The legend they tell here is vastly different from the version I grew up with, where my namesake performed a penance and wept over the people living under the shadow of fear and ignorance. I know that version like the back of my hand, its forms engraved into my body’s memory. I dance it in my mind’s eye, tracing Kudus and faith into the palm of my hand, as Han’s troupe plays out the Bayangan version in front of me.

I try to look beyond the surface of this performance to see what Han is saying in private, but again, there are no hidden messages—at least, not for me. Did someone request this story—someone opposed to the new policies I’m trying to push—or did Han choose it of his own volition? And if the latter, to what end?

* I made up this legend after the fact. The real story is that I was being very, very literal in my naming. Since Terang = Bright/clear, their enemy obviously had to be Bayangan = Shadow/shade. I’m sorry. Lol.

###
The Tale of the Hostage Prince is now on NetGalley, so if you have an account there, click the widget thing below to get an ARC! 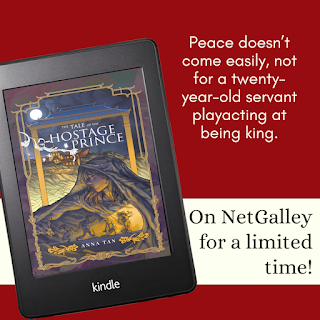 The Tale of the Hostage Prince
###
That's it for today!
Head back to my theme reveal and master list.
Go check out the other A to Z Bloggers!
Posted by Anna Tan at 12:30 pm