#AtoZChallenge: D for Developing The Tale of the #HostagePrince

One question every writer seems to get (or at least I do) is how did you develop your story? Did you write an outline first? Do you plan out your character arcs? Determine the beats of the story? Or do you just write and create on the spot?

Or, as common parlance puts it: are you a plotter or a pantser? If you don’t know what this means, here’s a great article: https://thewritepractice.com/plotters-pantsers/. Other terms include “architect vs gardener” or “outlining vs discovery writing”.

I’m…pretty much a pantser. I find it very, very difficult to sit down and work out an outline from scratch. I’ve tried. And failed. Many, many times. What tends to work for me is to start writing first, let the story grow in multiple directions, if necessary, until I hit a spot where I go, “There—there’s the story.” From that point, I can either finish up the story so that I know how it ends, or I can go backwards into writing a semi-coherent plot and outline, then work on rewriting the whole thing.

What now is The Tale of the Hostage Prince has a convoluted history. Actually, the development whole series is very convoluted. See, I wrote Absolution first—or what I used to call The Weight of Sin. And then I figured it needed a prequel to explain why Terang got to where it was. So I thought, why not make it a trilogy! Fantasy series are usually trilogies, no?

So I started planning it out:
Sounded like a good plan. I'd already gotten the third one. The first one was easy. It definitely had to do with Maha, and how Terang fell from grace in the first place. That slowly evolved into Amok, which also draws inspiration from the biblical tale of Samson and Delilah, because, magical strength, y’know?

But The Weight of Secrets had me stumped. I thought I’d go with something to do in Impian, which has Justices that have the gift of Mind-reading. Even the head of the Justices is called the Secretkeeper! So I was playing around with various ideas surrounding Nek Ramalan (the Secretkeeper in Amok) and her daughter Rahsia. Then I thought maybe the story would be about Iman, Rahsia’s best friend, who shockingly inherits Nek’s powers (You can read Shattered Memories, a short story about this, in The Painted Hall Collection—though it’s a little outdated by now; Rahsia’s journey and many worldbuilding details have evolved since writing that in 2018). But nothing really stuck.

So I thought okay, fine. I can work with a duology. That’s not uncommon.

But by the time I was finishing Amok, Yosua had grown to be so much more than just the sidekick—I’d initially planned a dual POV between Mikal and Yosua for Amok before I switched over to Mikal’s POV exclusively. Yosua…deserved his own story. And I kind of wanted to know what he’d do after the events of Amok. Would he stay in Bayangan? And if yes, why?
Thus, The Weight of Secrets became Yosua's story, The Tale of the Hostage Prince.

More about that in H for Hostage and Y for Yosua!

For those still wondering how pantsers work with story, structure, here’s a good article on that: https://www.advancedfictionwriting.com/blog/2017/11/10/seat-of-the-pants-story-structure/
###
That's it for today! 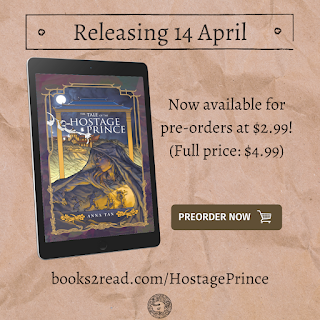 The Tale of the Hostage Prince (Book 1.5)