How integrated is your faith? 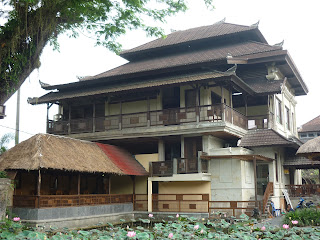 One of the things that really struck us, or me at least, in Bali was the way the Hindu faith is so intertwined in the lives of the people that it is difficult to separate the cultural from the spiritual.

For example, what do you think that building above was? Some sort of temple or religious building?
Would you guess that it’s actually the local Starbucks? 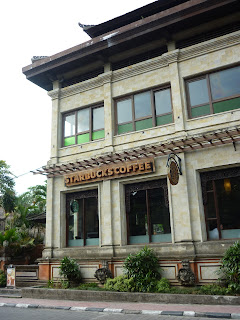 Here’s the picture from the front. But you wouldn’t have been able to tell without the sign, would you?

I received an e-mail forward recently which said something like this:

"You have offered us Christianity in a Western cup... Give it to us in an Eastern bowl and we will drink of it," is a famous statement by Singh, who converted from Sikh to Christianity after his personal experience with Jesus, who appeared in his room on one morning in the year 1905, when he was just fifteen years old.

Stanley Jones once asked Gandhi:
“How can we make Christianity naturalized in India, not a foreign thing, identified with a foreign government and a foreign people, but a part of the national life of India and contributing its power to India’s uplift?"
Gandhi responded with great clarity, "First, I would suggest that all Christians, missionaries begin to live more like Jesus Christ. Second, practice it without adulterating it or toning it down. Third, emphasize love and make it your working force, for love is central in Christianity. Fourth, study the non–Christian religions more sympathetically to find the good that is within them, in order to have a more sympathetic approach to the people."


Sometimes it feels that our faith is nothing more than something to dress ourselves up with every once in a while. Something to occupy our time and make us feel busy and wanted and needed. Church is something you do on weekends. Or on certain nights of the week.

But it really shouldn’t be that way. It should be so integral to our very being that we’d know instantly when God is missing, rather than going down a long road and realising that somewhere along the way something has changed. God should be so integral to how you live and breathe and work that people can see Him in you. In the way you speak. In the things you do.

I don’t think integrated is really the right word after all. Integrated implies two separate functions or cycles being combined. Instead, integral means “ necessary to make complete; essential or fundamental”.

So how integral is your faith to you?