#AtoZChallenge: U for Uncle Jeffett

I have a lot of conflicting feelings about Uncle Jeffett. On one hand, he’s obviously the Villain (or at least Antagonist) in this story, because much of what he wants is in opposition to what Yosua wants. Yet at the same time, what they both really want (even though they can’t agree as to how to get it or what it should look like) is peace and prosperity for Bayangan.

The thing about Jeffett is that he has ultimately shaped Bayangan a great deal just by being the one to hold the kingdom together when their Raja was killed and the Raja Muda (Garett) was taken away. If anything, he deserves a little honour for what he did in the past, even if his current actions rub against the grain.

Here’s a snippet from Amok, where Permaisuri Layla—Garett’s younger sister and the reigning queen of Bayangan at the time—explains what Jeffett has done for her and Bayangan.

Note: this scene is in Mikal’s point of view; Ayahanda in this scene refers to Mikal's father, Sultan Simson

Bayangan soldiers come and go, piling up treasures from the houses they’ve plundered, bringing in children in chains.

“Why are you doing this?” Ayahanda asks, breaking out of his stupor at the cries of a young girl. “Why do you do this, Layla? Take out your revenge on me. Let the children go.”

A soldier strikes him on the mouth. “Show some respect!”

“As you held them to the fire, so we will hold you to the fire. I should kill you and leave your son behind bereft and orphaned like you left me, but I’ll not make the same mistake you made. I won’t leave behind a child who will come for revenge. By the time I’m done with Maha, it will be nothing but ashes. No one will be left to avenge you.”

Then why leave me alive? Why not just kill me?

Garett places a hand on her shoulder. “Layla, please—”

“No, Garett, I will not be placated. I want them both to suffer. I will have my revenge for what they have done to me, for what they did to you.”

“Layla, nothing good will come of this.”

“You weren’t there, Garett. You weren’t there having to bury our parents, having to bury our brother. You weren’t there for the devastation of Bayangan. If it weren’t for Jeffett, I wouldn’t even be alive. He took me in and raised me as his own—then restored the throne to me. Don’t tell me what I can or cannot do, not when you have given up your right to the throne. Not when you’re a coward who has tied yourself to this spineless pretender. What is he now? He hides behind his god and his witchcraft and his spirits. Cut off his hair and what do you have left? A shell. Not even a man!”

Garett flushes and looks away. “I did what I had to do to keep our people alive.”

“You gave in. You even let him name your child after them.” She throws a disdainful glance at Yosua, who’s watching from a distance.

“You changed our family name—”

“To honour Jeffett Ishi, the man who saved me. Who stewarded Bayangan back from the brink. You gave up everything.”

“What would you have had me do? Sacrifice a name or sacrifice a people? A name is a small price to pay for peace.”

Early in The Tale of the Hostage Prince, when Yosua admits that he has trouble changing a law without backlash from the Majlis or the Bayangans, Uncle Jeffett says this: 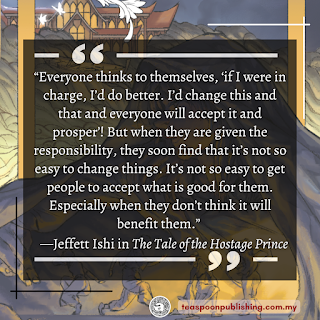 ...which pretty much sums up his philosophy on leadership/statesmanship. And that's the chilling part. Uncle Jeffett truly believes that the end he’s working for really does justify the means.