I am incapable of writing anything useful at this point of time, especially titles 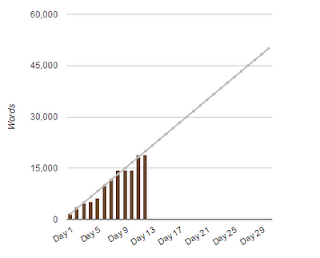 I had fully intended to write a fireplace post to consolidate certain musings over the past few weeks after reaching my nanowrimo word count for the day, but it seems that this was not to be.
For one, I feel that I'm all worded out after completing two 30 minute write-or-die sessions with approximately 1K words each. That's right... 2K words in 1 hour! *is unspeakably proud of self*
Brief nanowrimo update here: I'm more or less where I need to be, word count wise, and still pretty compact, plot wise.
I think I see what's coming in the next few chapters, but other than that, I don't have a clue. The only problem I'm having right now is the fact that the story seems to jump a little from scene to scene. (Stuff to be fixed when editing).

I also managed to catch up on the Coursera course I'm taking today, so that's pretty good too. The only thing I'm not happy about is that there will be another writing assignment due towards the end of November, so I might have to pick up the pace on nanowrimo during the public holidays this week to cover for that, only I might have to go out during those days. Boo =/

For another, I've been distracted researching soundtracks to possibly use in my Creation/Bridge dance/mime thing. As you can tell, I have no idea what to call it. Seeing that the creation of Narnia in Magician's Nephew contributed somewhat to the opening of the Creation narrative, I've been listening to The Lion, the Witch and the Wardrobe's soundtrack and finding that several tracks might possibly fit the feel that I'm looking for. Whether it can actually be danced to, is another matter, which the choreographer will have to figure out. (If it's a no, that's back to more research =/ ). Listening to the soundtrack though, I'm having second thoughts as to whether Everlasting Light (Mono) will actually be suitable for the Bridging portion, especially since the back bit is so long and I don't have any narration for that yet.

[Ok, as I write this, The Wardrobe, is looking like a very choice candidate for Creation.]

So much for being all worded out. I guess my frame of mind is not quite right for a fireplace.

A gradual realisation came upon him, one that left him frightened. This wasn't Earth. He didn't know if the sun continued to rise in the east and set in the west. He didn't know if the constellations were anything like those he had stared up at on sleepless nights when he had climbed to the roof for solace. He didn't know what kind of animals prowled the woods, or if they were carnivorous. He didn't know anything about the plants that grew in the forest, and if they were safe to eat, or if they were likely to eat him.
He didn't know anything about this world. For once, he wished he had paid better attention to the books Yiel had asked him to study. He frowned at the recollection. He had read a lot of books about geography and botany. Had Yiel known? Had Yiel guessed?
Whatever it was, he was on his own now, with whatever he had gleaned then. Taking a hesitant step after another, he pushed his way into the Flame Forest. He prayed to the gods that he would make his way out alive.
He pondered upon that even as he walked. Were the gods in Kayner the same as the gods he had prayed to back on earth? What if they were different gods? Then his prayer would have been to no effect and he could very well be eaten on the way to Amezine. What was the point in prayer anyway? Did it ever make a difference? It hadn't stopped him from being hurt back on earth, or even from dying, though he hadn't prayed when the Orb had taken him, so maybe that was why he died anyway. What did the gods want? He felt that it was something he needed to discover soon. Hadn't Kayle said that the Authoruss was also the representative of the gods on Kayner?
He stopped that line of thought immediately. It irked him a little that he had somehow ingested the idea that he was to be Authoruss. He didn't want to be. He didn't think he was the right person. So what if he had magic? He could hardly control it - well, to all accounts he had improved somewhat recently - and he barely knew anything about what he was doing. It felt more as if he was stumbling in the dark all the time. Except for the rare moments when that other worldly thing seem to take control of him. He shuddered. If that was what it meant to be Authoruss, First Magician of Kayner, he didn't want it. He was his own person, not something to be pulled about like a puppet.