#AtoZChallenge: E for Emigration and Exile

What does it mean to leave your country and head to somewhere new?

I think this question is one that many people are grappling with worldwide, whether they are considering emigrating for a better future, or whether they are being forced to flee their own country due to circumstances beyond their control.

I’ve left Penang and Malaysia for short periods of time, but never for good. It was always with the intention to return. But that doesn’t stop me from asking what if? What if, in 2015, I had decided to relocate to San Jose, California instead of travelling there every half a year for work? What if, in 2019, after finishing my Masters, I decided I liked London so much that I found a way to stay?

Besides, one of the questions ethnic Chinese and Indians face in Malaysia every so often is the question, Why don’t you leave?

My dedication for The Tale of the Hostage Prince reads:

For the diaspora,
third-culture kids,
and the pendatang who know no other homeland.

It’s funny (in the ouch-how-dare-you, not the haha kind) that third- and fourth-generation Chinese in Malaysia are still called “pendatang” (immigrants) and often told to “go home”. Even more awkward when the Baba Nyonya or Peranakan Chinese community get lumped into that, when their families have been rooted in Malaysia for centuries. What “home”, I have to ask? My grandparents were born in Malaysia. China is not my home.

Question: If a Chinese-Malaysian emigrates, are they the Malaysian diaspora or do they revert to being Chinese diaspora even if they have never set foot in China?

This kind of cultural and ethnic identity is one that Yosua grapples with in Hostage Prince. His parents were Bayangan, brought to Maha as captives. He was born in Maha, grew up in Maha, has “assimilated” because that’s all he’s ever known. And now he’s back in his “homeland”, the one he’s tied to by blood. And heritage.

But who is he really? 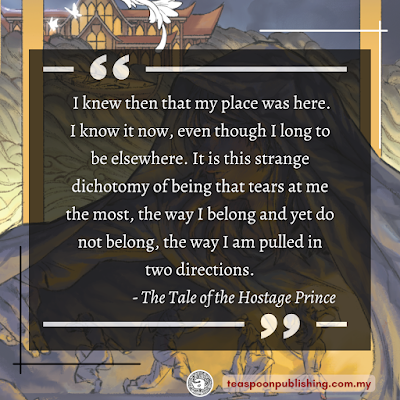 In Amok, Yosua made a decision to stay in Bayangan, to finalise his emigration, even though he knew the political situation would make it akin to exile.

Now he has to come to terms with it.