#AtoZChallenge: In the Xystus 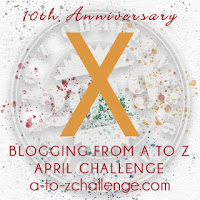 There was a xiphoid hole in Marcus’ view of the world. It was where his anger used to be, where his hatred and xenophobia once resided. No more. He slumped back against a column in the xystus, exhausted.

“Do what you will,” he said aloud, though there was no one to hear him. “I cannot do this any longer.”

“Who asked you to fight?

Marcus jumped at the words, twisting and turning to see who had spoken. There was no one around. “Who’s there?”

But no one replied.

Three days later, exhausted from his morning work out, Marcus leaned against another column, panting.

“You shouldn’t push yourself so hard. What are you trying to prove?”

Marcus looked around with a frown. He still couldn’t identify the owner of this mysterious voice. Again, there was no one in the xystus.

“What do you want?” he asked, feeling stupid for speaking to the air. Though for all he knew, the person could be hiding outside amongst the bushes. The portico was open-air, after all, and he couldn’t see around each tree and bush.

The voice seemed to have disappeared again.

The next time the voice spoke to him, Marcus was prepared. He had several of his servants hidden outside and scattered around the xystus to spot if there was anyone around.

“Guilt cannot be assuaged by a sword. Neither can it be diminished by running yourself ragged.”

“What do you seek to achieve then?”

Marcus had no reply and the voice didn’t speak again. None of his servants could find anyone in the surrounding area. Even his silent watchers were too far away for their voices to have carried.

Marcus was slick with sweat, hands trembling, as he leaned over in the middle of the xystus, hands on his thighs.

“You don’t have to haunt me, Justus,” he said as he panted. He’d thought this through over many nights, even as he pushed himself harder and harder every morning. “I know your death is my fault. And I know that I will never get over my guilt. So let me have this, at least.”

“What are you fighting for?”

There was a pause. “You know I’m no longer here.”

“It is not your guilt to shoulder.”

When Justus was alive, his calm, pointed questions would always make Marcus stop and think, would make him reevaluate the rash decisions he often made in anger. Justus’ last question hadn’t made him stop long enough to prevent him from lopping off the head of the other village’s messenger, the other village’s peace messenger, the one that turned out to be the chief’s only son, who had come with an offer of peace.

He’s lopped the boy’s head off because he was too dark and too swarthy and too other. And then there had been war and Justus had been killed in the retribution, had offered himself up for the chief’s anger, ending it all.

Marcus fell to his knees, hand grasping at where his sword should have been, the one he’d given up the day Justus died, when he’d surrendered his village to the rule of the other. Their chief had been merciful, only restricting him to his home. If Marcus looked hard enough, he could see his silent watchers, the soldiers guarding his property to prevent him from leaving.

“You can’t keep punishing yourself for the past.”

“Then why do you do this to yourself? Why do you punish your body every morning and starve yourself every evening?”

“What else is there to do?”

“He won’t expect you to. He’s given you this much.”

“He’s given me this much rope to hang myself.”

“Bitterness does not become you.”

Marcus slumped against a column, exhausted. “I cannot do this any longer.”