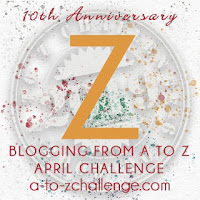 Zephaniah the Zealot had a zarf. It was made of silver, with beautiful chasing and filigree work, and he used it every morning as he sipped his Tazo Zen (TM) tea (a blend of green tea with lemon verbena, spearmint and lemongrass—the perfect way to add zest to his morning) from a glass cup.

The zarf was his prized possession inherited from his late grandfather, the only thing in the world he valued almost as much as his tea, so it came to quite a shock when he woke up one morning to find that it was gone.

“What do you mean you can’t find it?” he asked his housekeeper, who was actually his housemate that he’d bullied into making tea for him every morning and doing all the chores.

“It’s gone,” Benny said. He was quite tired of clearing up after Zephaniah all the time, especially when the man seemed to spend all day making YouTube videos about the benefits of tea and how everyone should drink them only from clear glasses held in zarfs.

“It can’t be! It was just there last night!”

“Yes, but it’s not there this morning,” Benny grumped, folding his arms across his chest.

“I can’t appear on YouTube this morning without my zarf!” Zephaniah was totally not zen about this.

“My audience! The people I preach to every day and extol the benefits of tea and zarfs!”

Benny rolled his eyes. “I’m sure they’ll make do without hearing from you for one day.”

“But if you don’t find my zarf, then I will never be able to make another youtube video ever in my life!”

Zephaniah fell to his knees. “You don’t understand, Benny. That is THE Zarf, the Best Zarf, the Greatest Zarf In  The World.”

“It’s like the holy grail. For tea.” Zephaniah clarified with a sniff.

“Please, Benny, you have to help me find it.”

Benny didn’t think about it for too long. Doing all the housework and making tea for Zephaniah was tiring and sometimes annoying, but he was paying very little rent. If Zeph reduced the rent even further, he’d barely be paying anything to stay there. It wasn’t a bad deal.

Three hours later, after turning the whole house over, Benny found the zarf hiding behind a zither. Where the zither came from or how the zarf got there, he had no idea, but he took it up to Zephaniah’s room.

“Oh thank you, Benny, my man, my best friend! You have saved the day! I will finally be able to make today’s YouTube video where my zealous fans have been waiting all day.”

“Wait, don’t go. Let me introduce you to my fans!”

Zephaniah turned his video cam around and Benny found himself being talked about as the saviour of the day, for having found the stolen zarf. Benny smiled awkwardly and waved, though he had no idea who was watching, or how many people would watch it later in the day. It was a matter of principle for Benny that he never looked at Zephaniah’s YouTube page. Ever.

As soon as he could, Benny escaped from Zeph’s clutches and scurried back downstairs. He needed to clear up the house after having turned it upside down in search of the zarf, but when he pulled back the curtains, he just couldn’t. It was a gloriously sunny day outside and all of a sudden, he was just desperate to get out of that zoo he called home. Seriously, living with a Tea and Zarf Zealot was sheer madness, despite the low rent (and even lower now, since Zeph had agreed to another 20% reduction). Pay peanuts and get monkeys, as his mother used to say.

Benny made himself a cup of Zeph’s Zen tea and then went out to the zoo.

OMG WE ARE DONE FOR THE MONTH.

Thank you to everyone who gave me words to use, even if I didn't end up using them! :)
Here's a link to the final list if any of you want to have a look.