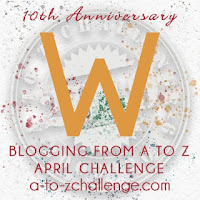 Winnie had always wanted a pet, but no matter how many times she begged her mother, the answer was always no. She tried asking her father, but his answer was “ask your mother”, so that wasn’t much use. Her best friend Wanda had a  rabbit named Wiggles and even her worst enemy in school had a cat, so it was quite unfair that Winnie wasn’t allowed to have a pet, even though she was almost ten.

One evening, when she was especially bored, Winnie wandered out into the backyard. She was standing by the fence, kicking at the clods of dirt, when she noticed weird little cubes on the trail outside. Winnie’s house in Tasmania was right beside the forest reserve, so she’d seen many wild animals passing by, but she didn’t recall seeing any of these strange cubic pieces of… poo before. Throwing a quick glance back at the house, she slipped out of the back gate and followed the trail. No one called after her, so she happily went on her way, being careful not to step on any of the poo.

Birds called overhead as she passed, but she kept her eyes on the ground, searching for this mysterious animal. She came to a sudden stop when she heard a quiet yelp.

Winnie peered through the folliage to see two small, furry, brown creatures talking. She frowned. How come she could understand what they said?

One of them looked up suddenly, staring straight at her. “Uh oh, I think we’ve been spotted,” it said. The two started to lumber off.

“Wait!” Winnie called after them.

The second one stopped and turned to look at her. “You can speak to us! Walt, wait—the human speaks wombat!”

Walt stopped, baring his teeth at Winnie. “I don’t know, Wanda, are you sure you can trust humans?”

“Is that what you are? Wombats?” Winnie asked, ignoring Walt.

Wanda nodded. “But how is it you understand us?”

Winnie shrugged. “I don’t know. I was just following the trail of poo when I heard you talking.”

Both Wanda and Walt started blushing.

“You… you didn’t see us then though, did you?” Walt asked in a strangled tone.

Wanda smiled. “Oh, nothing. It’s just… heh. Nothing, dear. It was just a slightly embarrassing thing. What’s your name, child?”

Walt’s nose twitched. “Not ours, I don’t think. But part of the wisdom’s.”

“The rest of our group. Not all the younger ones remember to clean up after themselves sometimes.”

“Mostly. This is our home territory,” Wanda replied. “Where do you come from, Winnie?”

“Oh, over there.” Winnie turned to point at her house, but realised that she’d lost sight of home. “Oh dear. I can’t see my house anymore.” She bit at her bottom lip. She’d been warned many times by her mother not to wander off too far, and the light was beginning to fade as the sun was setting. “I… I’d better go. I hope I don’t lose the trail.”

Walt and Wanda shared a look. “We’ll come with you, dear,” Wanda said. “If it’s that big white house near the fence, we know the way.”

The two wombats shuffled along beside her as they made their way to Winnie’s house. It didn’t take long before the trail seemed familiar again and Winnie saw the fence and her house beyond that.

“Thank you so much!” Winnie replied. “I hope I’ll see you again one day.”

“Maybe we will,” Wanda said.

The two wombats turned and walked back into the forest, leaving Winnie a clear view of a huge bite mark on Walt’s backside. She wondered about that as she hurried back into the house where her mother was calling her for dinner.

Wombats were an easy choice because they're cute. haha. I also could not pass up the chance to pass on the knowledge that, according to National Geographic, a group of wombats is called a "wisdom".

... on an aside, this has got to be one of the weirdest vids I've seen in a while.