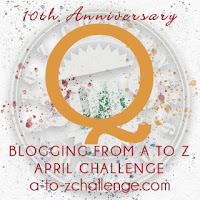 Dr Quaker was in a little of a quandary. He and his esteemed colleagues worked with animals and DNA, and he’d heard worrying reports that one of them wanted to use the DNA of the quagga to bring it back from the dead. Oh, he was aware of the current Quagga Project—but that involved breeding zebras selectively to look like quaggas, not trying to recreate a creature from its DNA. Hadn’t any of them watched Jurassic Park? Or Frankenstein? Well, obviously he knew revived quaggas weren’t going to suddenly morph from placid herbivores into Velociraptor-like carnivores, but what if they turned out to be brain-eating zombies instead?

At any rate, he didn’t want to be associated with quacks like that, so now he had to find a way to… find a new job, probably. Dr Quaker mulled over it for a long while before taking out his prized quill, dipping it into ink and writing a letter.

The new job in Australia was another whole new quagmire. He thought he’d be getting away from quacks, but it seemed that everyone in the community had wild dreams of saving almost extinct animals. At least the quokka was merely vulnerable, not yet extinct. Yet it remained that many of his new colleagues wanted to save and study their DNA just in case they could clone them or something sometime in the future.

He had to admit, though, standing in the middle of Rottnest Island with a quokka in his arms, that the happiest creatures on earth were rather… cute. When they were not shredding him to pieces with their claws. Or stealing food from his camp. Or stalking him in the middle of the night. If mad scientists wanted to clone anything, he’d go with the quaggas over the quokkas, if only because quaggas would probably make less scary zombie creatures.

After long consideration, Dr Quaker decided to take refuge in a quiet Quaker commune to ponder about life, the universe, and extinct animals.

This one's short again because I didn't know where it should go. A quagmiry quandary, indeed. :p