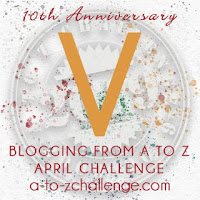 It wasn’t vanity. At least, it wasn’t to Vanessa, not anymore. It was the need to stay in charge of something, even if that something was just the way people saw her. She needed to look poised and in charge, ready for anything the world threw at her, whilst her life burned down to ashes. If she went down, she would go down looking beautiful, like the queen she was. Should have been.

Vanessa hadn’t understood this when she was younger. She’d looked at the women, both young and old, who populated the spaces she inhabited and scoffed at the thick make-up and perfectly coiffed hair, making snide remarks about how vacuous they were, how air-headed. She had things to do, great things to achieve, and she would do it by sheer willpower without resorting to sexual wiles. She didn’t need to look pretty doing it, she just had to do it.

It’s funny how a decade or two changes things.

“I am.” Foundation first, smearing it on thick, smoothening out her skin. Concealer for concealing, hiding all her imperfections.

“You can’t—getting pulled into their vortex will kill you.”

“I can’t paddle hard enough to stay outside them.” Contours. Highlights. Illusions to make you thinner, sharper, more desirable. But also, pointier.

“It’s the way of the world. It’s sink or swim, dear.” Was she pointy enough? With edges sharp enough to cut? Her brows were on point. She hoped.

“Look if I don’t play the game, I’m out. And then where would I be? What would I do? If I play the game, at least I’ll still be…somewhere.” Eye shadow, sparkly but subdued. Look at me, look at me, it screamed. You want me, it whispered.

“No. Not if I’m smart enough.” Eye-liner. Such stabby things. She hated them.

“No one is smart enough. You can’t challenge the establishment.”

“I’m not challenging it. I’m working with it to subvert it.” The perpetual blush. Pink, rosy, healthy—not quite demure. She wasn’t going for demure, she was going for Queen.

“We don’t know that yet.” But they would, soon enough. A final touch of red on her lips. She closed her eyes. This was it. This was the reinvention of Vanessa Ling, the explosion of chaos, into She Who Has It All.

The thing with success is… it comes to those who look successful. The world had an idea of what victors and losers looked like, and if your skin wasn’t the right colour, at least your clothes and demeanour could make up for it. As could your make-up.

Vanessa had thought it vanity, a long time ago in her youth, but now she knew better. She knew to hide her vulnerability behind a mask of victory, skirting the vortex of those who would bring her down by drawing closer to those who could pull her up with them. It wasn’t quite the truth, not yet, but it was an armour. And the more you wore a mask, the more you became it.

Vanessa would look victorious, even if she crashed and burned. And no one would be able to tell the difference.

I seem to have forgotten how to write. Not entirely sure if this makes sense at all.
Posted by Anna Tan at 4:30 pm